The history of Orlandi, from Montecosaro to Rome 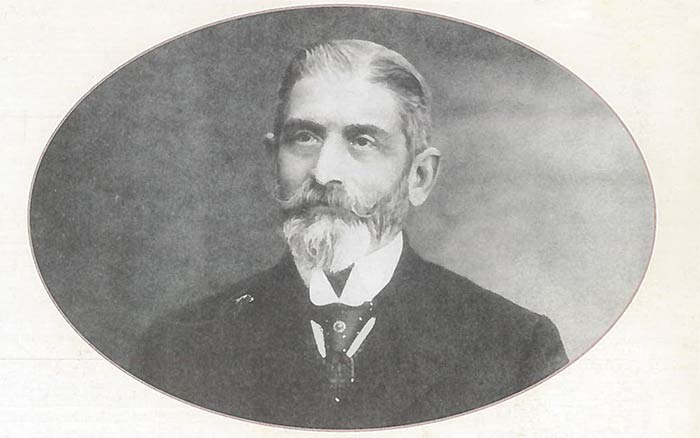 Venerio Orlandi (1844-1915) was born in Montecosaro by Antonio and Giovanna Paniconi at n° 43 of Cassero, just behind the at time Monastery of Saint Augustine (the home, now demolished, faced the actual 4th November street and was adjacent to another still existing house of the Orlandi family).

After the primary education at Montecosaro and subsequent education at the Seminary of Fermo, as well a PhD degree in literature and arts, Venerio taught for many years in Forlì where he married Francesca Contucci, daughter of the President of the local Court and former Governor of the town of Rimini at time of the Plebiscite.

In Bologna he used to meet the circle of the literate near to the Italian poet Carducci. He had a sole son, to which he gave the name of his father Antonio, that will exercise the barrister profession in Rome and inherit the law firm of Alessandro Fortis as the latter will be appointed Prime Minister in 1905.

The cultural environment of Venerio Orlandi is with no doubt the one of the at time best political “Risorgimento” intellectuality of the Marche and Romagna regions. The same environment attended by other citizen of Montecosaro as Alfonso Cerquetti, that was also teacher in Forlì for some years, and Carlo Malerbi that was in relation with the Forlì citizens Saffi and Fortis as well as major of Montecosaro at time of Italy’s union.

Said relationships seem to pass through Montecosaro where, in the political and sparkling cultural climate that followed the experience of the Roman Republic, Venerio spent his childhood.

There Carlo Malerbi and Antonio Gatti, heroes on the battlefields, where moral guides of the municipal “Risorgimento”, since both thought there at the “primary public school” where the working class children were educated with massive doses of Latin.

It is very likely that due to the strong classic education received at Montecosaro, to the will of his father to offer his sons a high education, and the encounters of said period, Venerio acquired his strong interest for the humanistic studies in which he distinguished as well for teaching (also his brother Gaetano will become teacher).

At the end of the 20th century, due to his collaboration with Enrico Mestica, minor brother of Giovanni (the latter literate of fame as well as member of the Parliament since 1890) is jointly published the Anthology of Prose and Poetry (publisher Zanichelli) that will have great success in Italian schools and be reprinted for more than thirty years.

After Forlì, Venerio settles (for health reasons) and teaches in La Spezia, then in Massa and subsequently in Fano. In said years, he established many professional and female schools.

Since 1897, he is appointed dean of the gymnasium Torquato Tasso of Rome of which he will be considered the pioneer “founding father”.

The innovative project he conceived for said school, executed in accordance to his precise indications, was awarded the 1st price with gold medal at the International Contest of Brussels.

He will remain at the Tasso gymnasium until his death.

Said high school, initially without name, without a fixed site and with few students, became a big school destined to best receive and forge the children of the new society, the new clerk and executive class flowing into the new capital, i.e. The city of Rome of century’s end, that fatigued to support the weight of its vertigo and chaotic growth.

The “Orlandi” – report his contemporaries – knows how to be the right, severely but affectionate educator, worries that the student’s education is open and modern without abstruse minding and teaching rigidity.

He selects the teachers but he does not get tired of recommending love for the young people entrusted to them. He calls for parents to participate in the educational work and to him and to his school all parents would like to entrust their children.

He is the headmaster -we could say- that to great humanity, intelligent and non-wiggy education combines a nearly missionary vocation, inspired by Italian “Risorgimento” ideals.

Significantly, Venerio Orlandi dies just as many of his former students are called to the war, that Great War that will hit a heavy blow to the Italian based Risorgimento State, to which through his school he had relentless given ideas and energies to.

The newspapers will heavily commemorate the “valiant and wise ruler of the Regio Liceo Tasso”. At the burials at the Roman Church of the Sacred Heart will take part, together with a large crowd of his students, teachers and authorities, the Prime Ministry Salandra and the Minister of Internal affairs Grippo. Venerio Orlandi is buried in Montescdudo-Monte Colombo (Fo).

He left many philological writings and, among the schoolbooks, the lucky “Young Philologist”. It is also worth remembering its historical memory on the Torquato Tasso Rome Gymnasium. A tombstone remembers his “dear and good image” in the atrium of that school up to date.

At Montecosaro, however, there is no visible sign left of his existence, except his signature, to the most unknown, at the foot of the commemorative plaque (1893) of Mayor Malerbi located in the City Hall. On the contrary, the ancient memory of the affection of his relatives to the news that Venerio, called to give lectures to Jolanda of Savoy, had had lunch with the King will endlessly continue to be handed down to posterity.

Why in his native town no one ever thought about giving him a plate or a road to remember his name, it is hard to understand but it may be never too late. 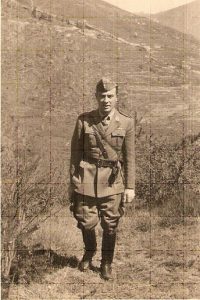 Goffredo Orlandi Contucci, nephew of Venerio Orlandi, in a photograph of 1935 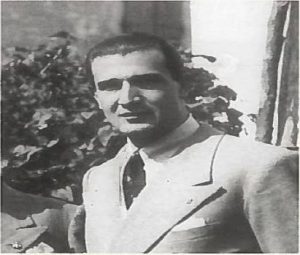 The Orlandi settle to Montecosaro at the end of the 16th century with Eliseo, son of Baldassarre and niece of Giuliano.

They came <sost> Torre San Patrizio (AP), were been landowners in the Fontemaggiore district at least <sost> the XVII century.

<sost> Eliseo, a male line, with the prevailing name of Nicola, preserved in the country for about four centuries and reaches to current days: Don Giuseppe, last of the Orlandi of Montecosaro, Monsignor and Treasurer of the Seminary of Fermo, died in 1973. “Don Peppe” and his nephew Odile Grassetti (died in 1969) are the last to live and own the Orlandi House (since the 1970 in property of the Serafini family) just behind the city hall building.

Eliseo’s descendants were quite numerous in Montecosaro in the last century: five or six households in 1850 and include – an abbot, a schoolteacher and a wealthy copper craftsman.

The latter was Antonio, father of six children, including Venerio, literate and charismatic dean of the high school Gymnasium T. Tasso of Rome at the turn of the 19th century.

In Montecosaro, Antonio’s descendancy (1803 – 1875) passed through Domitilla, in the 40’s, through the Marchetti, Piolo, and Scipioni families through Giacomo, who continued his father’s activity and transmitted it to his nephew Tullio, son of Beatrice Orlandi.

The Orlandi branch of Rome descends <sost> Venerio, through his son Antonio.

Another Marche Region located Orlandi family branch, which has been present in Corinaldo since the 15th century with arms- and lawmen, is reported by the historical Colucci in the VI volume of its “Picieno- Region Antiquities” telling it as originating <sost> Fermo, where there still is the “Orlandi street”.

The family name is reported in the lists of the patrician families of the Marche Region of the cities of Fermo and Corinaldo. 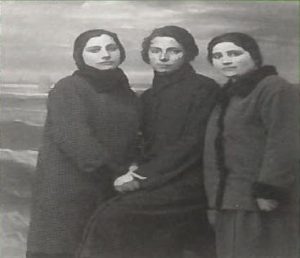 Francesca Marchetti (in the center), in a photo of the 1920s. With her sisters Peroni, Gemma and Onorina.